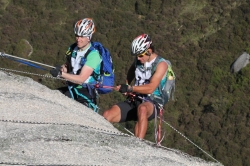 Day one of Raid Gallaecia began with a short mountain biking stage, but it was long enough to introduce teams to nature of the race here in Gallaecia.

The rolling hills of the region provide continuous ups and downs and they have a dry surface covered in low scrub of gorse and heather, with loose rocks and a complex network of gravel roads (made more complex by the access roads for all the wind turbine developments).  In the valleys the roads are better and the landscape is lush pasture lands, and everywhere there are wild horses, goats, and cattle.

All of this makes the navigation complex with close attention needed on the map all the times.  Bjorn Rydvall of AR Sweden commented on it after the opening stage and as teams get tired (especially those with only one navigator) navigational mistakes will play their part in this race.

The lead pack of teams arrived at transition one within a couple of minutes and spilled out into the centre of the village of O Viviero. This tiny village is dominated by an ancient bell tower and church and is full of weathered and crumbling, stone block buildings. Not that the teams were paying attention, they were racing through transition and engaged in competitive bike building!

The first transition gave teams a taste of the Galician hospitality which is part of the character of the race.  In many ways it is the heart of the race.  A huge marquee had been erected for all the bike boxes and had it been wet teams could have transitioned in there, and there were dozens of supporters gathered around all cheering teams in enthusiastically. The race announcer on the PA was very enthusiastic too, shouting out support for each team by name in rapid fire Spanish.  (There was a food bar for race staff as well, which will be set up at each transition.)

The second transition of the day, which most teams passed through in the evening, was set up in the square directly in front of impressive Mondonedo cathedral. The race makes full use of the many historic monuments and churches in the area and the twin towered facade rose hundreds of feet above the teams. Some Raid Gallaecia transitions have a sense of theatre and this one certainly did. There were hundreds of spectators on a terrace across the square, the PA was in full flow and as darkness started to fall he gave way to a heavy metal band performing on a stage on the edge of the square.

Between the two transitions the first trekking stage of the race took teams 40km over the Sierra do Xistral ranges. These are covered in thousands of wind turbines and on a breezy day they were thrumming rhythmically as teams walked alongside them.  The ground on the trek was often dry scrub and there were many tracks, which was all hard on the feet.  At the end of the trek Team Yeti of Denmark were in third place, but the price they’d paid was that Laura Lambaek had some blisters, which isn’t good so early in the race.

On the hill tops the wind which was driving the turbines was cold and strong at times, and low clouds rolled around towards late afternoon, a reminder the weather here is very changeable and wet weather can quickly roll in off of the ocean.

Towards the end of the stage the teams arrived at the rappel section (CP8) near the A Toxiza viewpoint. Here there was a large outward sloping slab of rock which teams roped down into the valley below, going two at a time. There was an impressive view while waiting and the 80m descent was quickly accomplished.

I saw the Hamilton team arrive here and Maria Ehlin was struggling, walking slowly without her pack to the top of the outcrop. She said later, “I was finding it hard there.  It is so early in the season for us we’ve not done much trekking.”  Maybe this coloured her view of the abseil as she said, “It wasn’t so exciting and just seemed to be there because the race needed a rope stage. It was probably good for the pictures though!”  She was looking much brighter as she prepared to set off on the second riding stage.  (Maria is the oldest of the team at 30, making them one of the youngest in the race, and though they had started quickly with the leaders they fell back to mid-pack on the trek.)

I also saw Uruguay Natural Ultra Sports at the end of the trek as well and Reuben Maduro repeated Rydvall’s earlier comments on the navigation. “It is really hard,” he said, “very mentally tiring.” His team mate Fredericka Frontini still seemed to have plenty of energy as she was dancing to the music as she unpacked her bike!

The ride ahead of teams through the night is 133km so they’ve been advised to take plenty of food and told they can find water along the way.  There is caving stage towards the end and fastest predicted time is 13 hours 30 minutes.  However teams are moving faster than predicted so far and as a result the dark zone on the following kayak stage has been changed and is now between 20.00 and 06.45.  (It may not affect many teams.)