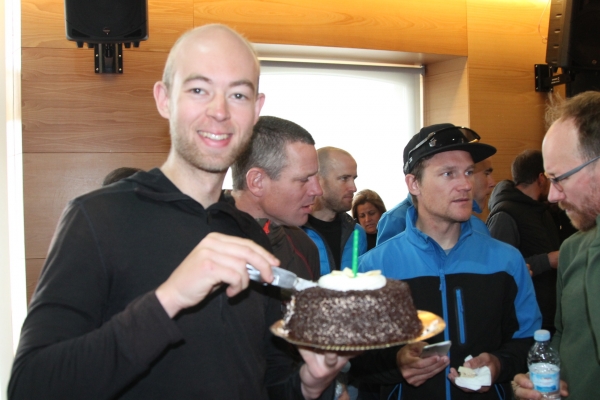 Raid Gallaecia came to a close with simple closing ceremony in the town hall of Viveiro today for the teams, organisers, sponsors and town officials.

Some teams had already headed home but around half remained for a showing of the race film and a lunch with the race organisers.  It was a relaxed and simple finish to the event before teams were transferred to the airports at Santiago de Compostella and Coruna.

The film followed the race day-to-day and featured quite a few spectacular drone shots of the race locations.  The wind in this area is so strong that drone shots are not often easy to get and the film crew took the opportunity offered by the good weather on the first 3 days of the race!

After the film Race Director Pablo Lopez invited everyone to a buffet lunch, but as he’d just about lost his voice it was all he could say!

Lunch of sandwiches, cheese and local walnuts and pastries was prepared by race volunteer David Senra Eiroa who is a caterer and chef.  There was also a birthday cake brought out for Marijn Edelenbosch of The Dutchables team!

It was a chance for a last chat between the teams over a beer, and to thank the organisers for all their hard work before the call came for the bus departure for the airport.

Teams leaving were even offered trays to pile up the remaining sandwiches and cakes to take with them on the 2 hour bus ride to Santiago.  They have the easier transfer as the next one is a 5am tomorrow morning.

(The race film will be posted in full to the Raid Gallaecia Facebook page shortly.)