The first night of Raid Gallaecia 2019 was a tough one for the teams as they followed the 133km cycle route to transition 3 at Pontenova, and into the afternoon of day 2 most of the teams are still on their bikes.

During the night the lead changed and Naturex, who started the ride in the lead, were passed by AR Sweden and Yeti as they made way through the myriad paths of the Gallaecian hills. It was the Swedish team who took the lead and even they took 2 hours  longer than the predicted 13 and a half hours, arriving at transition 3 at 10.54 in the morning at the riverside cultural centre in Pontenova.

They sat closely grouped together in the large hall of the centre, chatting constantly (apart from Mattias who was marking the new set of maps they were given on arrival). “It was really tough to navigate,” said Bjorn Rydvall, “I don’t ever remember any adventure race ride with so many intersections, and of course there are new tracks not on the maps.”  He said they had not stopped to sleep at all and had no mechanical issues. He added, “We saw lots of eagles and wondered if maybe they were waiting for us to fall down!”

Rydvall races with Type 1 diabetes and I asked how the race was going in that respect. “It is always a bit chaotic the first 10 hours or so,” he said, “then it settles down.”  Then he added, “I am glad you asked as I have forgotten to take my insulin!”  He sat down and unpacked his bag there and then to find it.

The paddle put-in is 200m along the road and the team readied themselves on a grassy field at the riverside.  The sit-on-top kayaks in use are not the most comfortable yet AR Sweden are the only team not to have kayak seats to fit.  Instead they had thick foam pads and Rydvall said, “I don’t like seats with back rests, then you fall asleep!”

Next in were Yeti, arriving just after midday, and they too sat close together as they prepared and checked through their paddle gear.  Henrik Jorgensen told me, “We had a plan and stuck to it well. We wanted to keep something back and I think we didn’t push too hard.”  (Only an adventure racer could say that after a 17 hour overnight mountain bike ride).  He told me that the team had a good sleep for 20 minutes on the way.

Laura Lambaek told me her feet were “still sore, but OK.”  She added, “I am off my feet for a long time before the next trek and with some fresh and dry shoes and socks I hope everything will be OK.  Anyway, there is nothing else to do now.”  When I asked about the paddle ahead she said, “We are not the best at paddling, we are stronger on our feet.” (Their strategy is likely to be to make a push on the longest trekking stage which is still to come.)

Her comments on the paddling were prophetic as at the first (very) small rapid her boat tipped and both Lambaek and Torbjorn Gasbjerg were in the water!  Fellow Dane and Race Referee Lars Bukkehave was watching and frustrated with them as he’s been training them.  “That’s the reason they are not Seagate,” he said. “On foot, bike and navigation they are fantastic, but not on the water. They were not focussed, not following the first boat to see their line and lost concentration.” 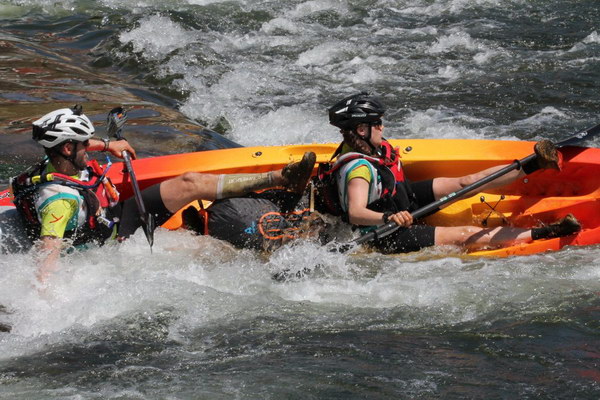 That minor mishap aside they are still in a strong second place however, only just over an hour behind the leaders.

Team 400 Naturex were in transition while Yeti set off, but the atmosphere with the team wasn’t good. They were scattered across the hall, all doing their own thing, not chatting much and looked a bit dejected.  “The ride was so long and hard,” said Adrien Lhermet. “We took 5 hours longer than expected and for the last 3 hours had no food.  The maps were difficult and I think now we might aim for second but the Swedes are too fast and we won’t catch them.”

The second French team, Issy Aventure Occitanie, were much more animated and purposeful when they came in and took the time to sit at a table outside the cafe in the centre and have sandwiches and ice creams before leaving.  They had passed Team Hamilton towards the end of the ride and moved into 4th. (Hamilton also have a 2 hour penalty for losing their camera.)

Most teams are using the cafe and leaving with a take-out bag, and those who finish in the day will have that option.  The cafe looks out onto 4 huge old brick iron kilns, a remnant of a major industry here at one time, and this history also featured at the final checkpoint on the ride where teams made a cave descent.  Through a small entrance they found a large cavern from an old iron mine, and had to descend to the CP punch, using a hand line over the slippery rocks.

Looking ahead towards this evening the race ‘Dark Zone’ comes into play from 20.00, except it is not really a dark zone as the race is trying to keep teams moving.  Only the first 12km of the Eo river has any rapids, so the 20.00 cut-off allows teams to get past these before it is dark.  Teams arriving after that can take a riverside path and walk the 12km to put in beyond the dark zone section (with an hour penalty).  They do have the choice of stopping and waiting for 06.45 when the dark zone is lifted and it is likely any arriving late in the night will do that (given it is the second night of the race and will have just finished the long bike ride.)