On the third afternoon of Raid Gallaecia the race at the front intensified.  The lead changing for a while and the top three teams are all balancing the need for sleep, and the improvement in performance it might bring, against the ground lost while not moving forward. 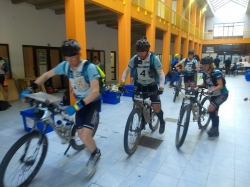 Both AR Sweden and Yeti stopped to sleep last night. Yeti laid down in a filthy shed, and ARSweden out in the open for a couple of hours, and through the day the teams were close enough to be in transition at the same time.  When ARSweden were forced to lose time returning to transition to replace a pedal with a problem with the bearings, they lost the lead, and it stayed that way for the next two stages.

Yeti pushed on and kept a strong lead through the ride to the coast and the following trek and Stand-Up-Paddle stage, then opted to sleep at TA7, allowing AR Sweden back into the lead. It might seem a strange tactic, but the extra sleep should give them better speed into the 3rd night, and the Swedes will need to stop again at some point.

I’m not sure where Yeti went to sleep in the cavernous building housing the TA, but I hope it was far enough away from the accordion players practising! (They were asked to move out of the main TA area and had gone off to another room.)

ARSweden are one of the most established and successful teams in Adventure Racing, but the line up for this race isn’t their regular team of recent years.  Mattias Nystrom is returning to racing after a long layoff due to fatherhood, and because he says he hit the wall and needed a break.  (His last race and win was here in 2015.)  I asked him how it felt to be back and he replied, “In some ways it’s like I had never been away, but I am now remembering just how much everything hurts!”

New on the team is Erik Rahimi who told me, “It's great racing with this team and we are getting along well.  My background was originally in ice hockey but I have been racing multisport for many years now and I love it. I’ve done some long races but never anything this long. The third night is a new experience for me.”  He might have said more but team boss Bjorn Rydvall called across to get his attention ... and to stop him being distracted.

These two were the ones who undertook the Stand Up Paddling on a lake in the hills which the teams stopped at during a 21km trekking stage.  Only two of the team undertook the 1km paddle across the lake and neither had an experience of the sport.  I asked Nystrom if it was hard to get back on when you fell off and he smiled broadly and said, “We never fell off.”

[It was good to see the paddle was a real challenge rather than a 10 minute paddle around a harbour and when I spoke to 3rd-placed Naturex Nicolas Seguin said, “It was very hard and I came off a couple of times. I tried to kneel to start with but my knees were too sore.”]

The Yeti team have raced together many times, and for almost 18 years including many World Series and other international races.  They made a point earlier in the race about following their strategy  but today Torbjorn Gasbjerg commented at TA5 that he still thought they were sticking to their plan ... he just couldn’t remember what it was!

Sleep and mistakes will count as much as strength and endurance as the teams move into the final stages and they are now on a 105km bike race. Given how tough the first big bike stage of the race was, and that they are doing most of it in the dark, they will have to concentrate on their navigation and speed, without worrying too much about their rivals.  It won’t be easy, especially if they can see their lights, or when making the decision to stop and sleep.

The competition tonight at the front of the race will be both cat and mouse, and hare and tortoise.