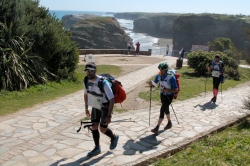 The weather on day 3 Raid Gallaecia continues to be as good as it can get for this region in May. It’s a day of clear blue skies, 20C temperatures and unbroken sunshine, and the race staff keep telling us “it is not always not like this, this is not Galicia!”

Some teams had the good fortune to enjoy the weather as they trekked along the coast on the ‘Camino Natural Ruta del Cantabrico’ this morning.  The path follows the coastline of the Cantabrian Sea as closely as possible and the racers walked on trails and small roads, set between grassland and scrub  full of scented herbs and the low cliffs and beaches of the shore. Sometimes it is not all about going fast ... the leaders missed it all in the dark but the majority of teams enjoyed some of this stage in the daylight.

We met up with the Fluvial Lugo team as they arrived at CP30, which was at the most popular visitor viewing spot on the coast, the Praia das Catedrais, or the beach of the Cathedrals. The cliffs and rock stacks here are the most impressive on the coast and the team made their way through the visitors to find the control punch on the back of the tourist information booth.

This team are local to the area so it wasn’t new to them and as she put on some dry, clean socks Luisa Felpeto Gonzalez said, “I think these will be better for the rest of the trek now!”  From that point on the route left the coast and headed up into the hills again. “We had a good paddle,” she told me. “The tide was with us and the wind had dropped, so it was as good as possible in the Ria, then we slept 3 hours at the transition and had some food.”

Further back along the coast we found the Aventure X-perience team, who had similar conditions and were in good spirits, though they had only slept one hour.  I was talking to Carles Domingo Dilmer as we walked along the road and said that I was impressed he could hold a conversation in a foreign language after so little sleep.  “Yes, but I forget what the question you asked was.” He replied.

“We were the first team to miss the dark zone on the river,” he said, “but in a way we were lucky.  We walked the 12km to the next put-in taking just over  an hour and passed a team who took 3 hours for the paddle.  The water after that was flat and safe, but we still capsized twice!”

The team said they just wanted to finish the race and were concerned about the next race cut-off ... but could not remember when or where it was without pulling out their road book.  They were looking forward to the next town and stopping for a coffee, so maybe they checked then.  I don’t think they need to be concerned as the next and last cut-off is at T6 at 09.00 tomorrow so they will get through comfortable at the pace they are going. (All of the ARWS teams made it through the first cut at TA3 and 3 couples teams were rerouted to T5 from there.)

Just behind them were the all ladies team As Vellas Non Paramos, who are racing unranked. (They were taken off the first trek and moved forward to the paddle on the river Eo as they were moving so slowly, and have raced on since then.)

Mercedes Arbelazaiz is a very experienced Argentinean racer and was leading the way and navigating and she told me the team had coped with a few problems along the way. “We lost one of our paddles very early on kayak stage,” she said, “so it was very difficult, especially in the Ria, but it was lucky we had the tide in our favour.”

“We are all from Argentina,” she said, “though one of the team has lived here in Galicia for a long time now.  At home our sea is not so rough, we have a lot of beaches but not many cliffs like here. It is beautiful to see and we are enjoying it all!”

At the front of the race this morning the race lead changed.  Team Yeti had been chasing down AR Sweden, gradually catching up and both teams were in TA5 together.  They were helped by the Swedes making quite a few navigation mistakes towards the end of the trek and joked that it looked like they had only just picked up a map for the first time.  (I know the Danes slept, but am not sure about AR Sweden.)

It was the Swedish squad who left first on the next 27.5 km ride, but they turned back not long afterwards after breaking a pedal.  The headed back to the TA to find their spare and replace it, but this let Team Yeti take the lead.  They still had the ride to finish and another 105km ride to complete so had no real choice, but in such a close race it will be hard work to pull back the lost time.  (At the time there was still an estimated 22 hours and 4 stages to go so they will have the opportunity.)

Much may depend on navigation of course, which has been such a feature of this race and will only get harder as teams are more fatigued.  (Yeti have 3 navigators and work with two while riding, and a different pairing while trekking.)

One team who found the navigation just too hard are Uruguay Natural Ultra Sports. They pulled out after the first long ride and when I met up with them today said, “The navigation was just too hard for us! There are so many choices and we had to keep stopping and made some big mistakes. The leading teams can navigate without stopping much but we can’t do that. The maps were really good, but our navigation wasn’t good enough for that ride.”