Raid Gallaecia 2019 | Getting to Viveiro and The Finish Line

After the excitement of the winners arrival yesterday teams continue to make their way into the finish at Plaza Mayor in Viveiro, some having completed all the course, others just parts of it and all overcoming different challenges to get there. 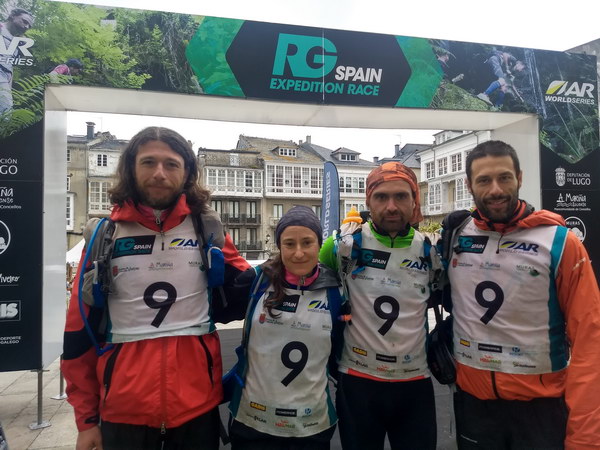 Issy Aventure Occitanie finished 4th, following their compatriots Team Naturex into the finish line, and showing some of the strength in depth of French racing.  (Adeorun Adventure of France are still on the full course too.

The first Spanish team to finish were Pedasi Paradise, despite some major health worries about Mariana Pontes Marques who had some serious breathing problems on the course.  When I spoke with Arnau Julia Bonmati this morning he told me, “Mariana was breathing really heavily, struggling for breath on the long trek as went along the coast and we thought the race was over as she would not be able to climb the hills. But she did better than we thought and we continued. Maybe it was some allergic reaction, we don’t know. Then we finished the race strongly with a good speed and rhythm.”

In fact they were the fastest on the later stages and Race Director Pablo Lopez felt they looked in the best condition on the finish line and might have been competitive if everything had gone well for them.

Bonmati was returning to World Series racing for the first time since winning the World Champs in Spain in 2010 and I asked him why he came back.  He smiled wryly and said, “I don’t know! Maybe because they called me and asked!  I am mostly rock climbing these days and I felt I wasn’t in the greatest shape for this.  I love adventure racing but I’m not sure I have the motivation to put in the hours of training that would be needed to be at a good level again.  I enjoyed the course however, and it was good to be back this time.”  His team still finished 5th and as the top home nation team.

GymCity AR of Poland finished 6th and they did it with flare ... literally.  In the early hours they ran into the finish with flares which lit up the town square to put in an impressive finish ... and one which attracted some attention.  The National Police turned up to see what was going on!  There were reassured quickly and the officers were fascinated by what was going on in the race.

Two teams who were unranked also finished overnight. The all women’s team As Vellas Non Paramos from Argentina arrived at the final kayak transition and went down to the waters edge with their boats ... then thought better of it and headed to the finish, which is just a few hundred metres down the road from the transition!

The Haglofs Raid team who had started as a team of 3 also made the finish. “We cut short the first ride so we could do the paddle on the rapids in the daytime,” said Meritxell Martell Lamolla, “and then missed the final ride as we thought it would be really hard, but from talking to the teams it was not as hard as expected after all.  Anyway we came Viviero to finish our race.”

It wasn’t mid-morning next day that Fluvial Lugo –OS Barbas finished in 7th place. They said the waterfalls on the last ride were quite amazing. “We live and climb here,” said Luisa Felpeto Gonzalez, “but had no idea about the falls or how big they are, or how beautiful. We will come back to them again.”

She was in her first expedition race as was another of the team, and Alberto Corral Alonso said it was his 3rd expedition race, but his first finish.

No more teams have reached the finish line yet, and further back on the course Gallaecia Raid Marmar Outdoor are the only team to be put on a short course after the second race cut-off.  Bringing up the rear and progressing nicely are the Dutchables who made it through the cut-off and Team Hamilton withdrew yesterday, unable to carry on due to injured feet and fatigue.

The young Swedish team were having breakfast with AR Sweden at the team hotel this morning, getting their advice and starting to process their experience of the race and the lessons learned.