There as a rush of teams at Transition 5 at Burela this morning, with some arriving for, and others leaving on, the trek and Stand-Up-Paddle stage.  The teams checked bikes and maps, and eat the pre-packed tuna pasta the race had provided, but for most part time was spent attending to battered and blistered feet. 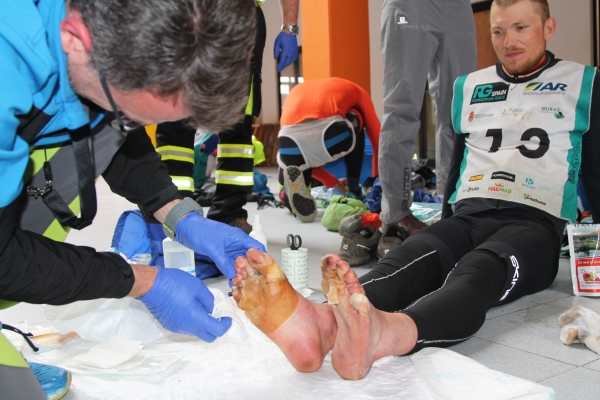 It was a busy time for the medics in attendance with one racer after another stretched out on the floor as the blisters and sores were cleaned, popped, salved and plastered.  The Aventure X-perience team were there and Carles Domingo Dilmer was wincing as it was his turn. He had told me yesterday he was worried about making the cut-off, which is at this transition, and when I pointed out he only made it with 24 hours to spare his team laughed. (It is at 09.00 Thursday.)

“The end of the last trek was very difficult for me,” he said. “I was hardly able to walk and going very slowly so I was falling asleep.  It was a tough time and I wondered what I could do if I could not walk. We made it to the finish of the stage and had another hour of sleep – so now a whole 2 hours in the race!”

After that they had ridden to T5 and Dilmer now faced the prospect of the 21km trek out to the paddle and back. Hopefully the medical attention had made him more comfortable and prevented any infections.

Soon after the Fluvial Lugo – OS Barbas team came in and they were in good shape, saying the were tired and making mistakes as a result, but they didn’t need any help from the medic and were busy applying tape and changing socks while Luisa Gonzalez was marking up the maps. “We are local to here, “she said, “but we have visited many beautiful places we didn’t know about and had not seen before that have been a nice surprise for us.”  (These two Spanish teams are currently in 8th and 9th place.)

In transition at the same time were Hamilton, who are 7th place but with a good lead on their nearest rivals as they had finished the trek and paddle.  The effort came at a cost however as Kristoffer Safsrom entered the transition limping and grimacing.  He was attended to by the medics (who were doing an amazing job) and it was clear his feet were in bad condition.  The pain was such he was feverish and vomited into a hastily grabbed waste bin. It’s the ugly side of AR but at least now he will be off his feet for almost all of the remainder of the race.

His team mate Maria Ehlin was watching as she is a doctor and was interested to see how he was treated!  Lars Lofgren is also a psychologist so the team have the professional skills to help him through!

When I’d asked Lars how the team was finding the navigation he said, “It is quite easy.”  I thought he was joking as no one else has said that, but apparently not.  “It is easy for Erick (Johansson),” he continued, “as he is a top class navigator and has had no problems. The only problem is when I take the map and then I mess up!”

They said at the start reaching the finish at Viveiro was their only real objective and they now have the 105km ‘waterfalls route’ bike ride to complete before the final short kayak and trek stage, and then the finish line.