Raid Gallaecia 2019 | In Search of Waterfalls and Lighthouses 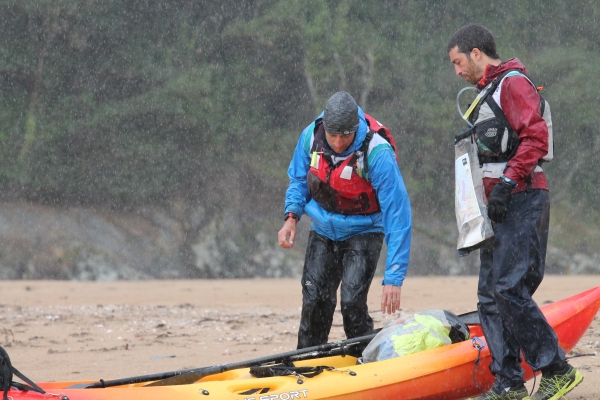 The final two stages of Raid Gallaecia have taken teams in search of waterfalls and lighthouses as they close in on the finish at Viveiro.

The last bike ride was called ‘The Path of the Waterfalls’ and 3 of the checkpoints were at impressive falls, one of them (CP42) 200m high.  Teams have found this ride easier than expected, maybe because the first one in the race was so tough!  They expected the worst but as Carles Domingo Dilmer from Adventure X-perience told me, “We found we were able to ride almost all of it, and not have to push our bikes.”  His team mate Dani Gallardo added, “Well as much as we had the strength for after 4 days of racing and 2 hours of sleep.”

The final waterfall on the trail was called Pozo da Ferida, where a narrow fall dropped almost sheer into a large pool, with the checkpoint flag set alongside it.  The falls are hidden in the woods with just a small signpost and I doubt they get many visitors, but the course planner found the location and linked it with others in the area to make this part of the route. The Raid Budino team and Adeorun passed through here close together and the French team took time out to take some photos of their stop.

After coming down from the hills the ride route took teams to the Fara Ronccadoira (lighthouse) set on the Eastern side of the Ria De Viveiro and then along the coast into Viviero, where they rode past long lines of fished nets and pots on the dock and checked into the final transition at the marina.  Here they were only a few hundred metres from the finish, but with one stage still to go, this one called, “Looking For A Lighthouse’.

This was situated on the other side of the estuary and was reached by paddling across, stopping first at a CP below the team hotel, then pulling ashore at the Praia da Abreta beach and trekking up to the lighthouse.  Teams hauled their kayaks ashore through the shallows and up the beach before setting off (still wearing their PFD’s as it was an unmanned stop and the race didn’t want them left unattended).

I saw the Basque team here, and it’s easier to call them that as the real team name is Udaberri Sopels Betibilbo.  This team had real problems on the first paddle with multiple capsizes which forced them into an emergency overnight camp on the river, but this time their paddle went smoothly. The sea conditions were not too bad though it was pouring with rain when they came ashore. The team subsequently finished in 9th.

They were just behind Aventure X-perience in the ranking, who were looking very happy and relaxed when I chatted to them at the finish line.  They are an experienced team with a slightly new line up and Dilmer told me, “We raced and communicated well and I think now this is a good team for us.  We are pleased to finish the full course, and it is my first ARWS full course finish after 4 or 5 attempts. We even have 3 full night’s sleep now before flying home on Sunday, which is good as I am father of a 2 year old!”

The race is looking set to get a very high finish rate, and mostly with teams on the full course.  If everything goes OK for the final 3 teams there will be 12 full course finishers from 18 starters, and the last will finish well inside the course closure time.  (In the early hours of Friday.)

However, the final teams out on the course are currently being dealt a tough hand as the heavy rain of the afternoon has become more persistent and fierce squalls are blowing across the estuary with some strong winds at times.  The sea conditions are not too badly affected but it’s still not going to be an easy finish for the final 3 teams.