Raid Gallaecia 2019 | Chatting With The Dutchables

I arranged to meet up with the Dutchable team after the prize giving last night to get their Raid Gallaecia story as the last team to finish, and the first Dutch team to finish an ARWS full course (for a long time or maybe ever). 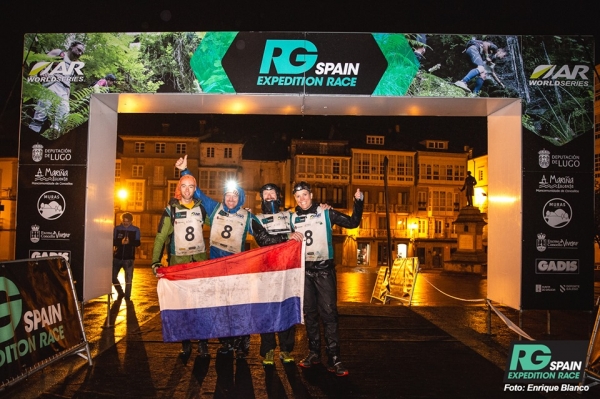 The team brought up the rear of the race most of the way around the course and finished early on Friday morning, 24 hours inside the course closure, and to do that by any margin was their only aim, other than to enjoy themselves. So how does a new team get together to try and complete and expedition race?

The team met up at races in the Dutch national series, which has about a dozen events a year, and had some previous long race experience. Marijn Edelenbosch raced the last Raid Gallaecia with a short-coursed Kuwaiti team and said he had some unfinished business, and some of the team had done the slightly shorter Basque race, two had been to Adventure Race Slovenia.  So they had served an apprenticeship in multi-day races.  They had a lot of outdoor experience too, with two very accomplished kayakers on the team.

I asked what they learnt from the Basque race and Edelenbosch said, “First there are lots of thorns which tear up your legs so we had gaiters so we could go anywhere without worrying, and second to have better tyres as we had so many punctures in that race.”

They also felt they spent far too long in transitions (which most new teams do), and set to work preparing to transition quicker.  Roles were decided, plans were made, timings set and the transition spreadsheet printed to list all that needed doing.  It even included applying sunscreen, and was beautifully colour coded. This was a team who liked to be organised!

There was a race plan spreadsheet too with the times they were aiming for.  Though Edelenbosch said he wasn’t so concerned about consulting that during the race, and Guido de Jong preferred to have his notes on his food bags.  There was no doubt however that they’d thought hard about what they wanted to do and prepared for it.

They had even done some transition training, timing themselves packing bikes (Guido was quickest) and preparing food but Edelenbosch commented, “We are not super fast like the elite teams, we just wanted to keep momentum and not waste a lot of time.”

Training isn’t so easy for them in Holland as there no hills and no river rapids to train on either, and the longest Dutch race is 12 hours.  However, they put in some long days of team training and chose the race in Gallaecia as it fitted in with their own availability, and because it was good value for everything which was included and for the reputation of the race.

I asked them about kayaking the rapids on the River Eo, as it was something they couldn’t prepare for, and Mike Fafieanie answered, “We got there in the dark zone so didn’t have to paddle them, so it was lucky in a way we could walk that section, but even the rapids after the dark zone section were more difficult than we expected and we didn’t feel safe on them.”

It was one place they were out of their comfort zone and I asked if there were others.  Eva de Vos said, “I got a bad stomach for about 36 hours and found it hard to take in any food and we had to go slowly and the team had to help me. We couldn’t run at all and I had to try and eat something, so that was difficult.”

The last stage of the race was a new experience for them as they were paddling on the sea at night, in strong winds and heavy rain. Fafieanie said, “As we were riding towards the transition we were thinking if we would paddle or not because of the weather, but they said to go ahead. There was a safety boat with us all the time which was reassuring, but we didn’t take our compass and were not always sure of our position in the dark and the currents.”

When they got to the finish they were very cold and shaking and said there was some elation but mostly they wanted to get to the hotel. “We had a long time on the last day knowing we would get it done,” said de Jong.

Fafieanie added, “We have a big Whatsapp group and reading messages there and on social media brought home our achievement more than anything.”

De Vos said, “I think it will take a few days or a week to process the race and everything that happened.”

Edelenbosch just commented, “I think some of it I’ve already forgotten as there is so much happening in just a few days.”

Fafieanice said, “Everyone who saw us said we were smiling, but why wouldn’t we be?  They said we looked good too, so we wondered what everyone else looked like!”

The team had had a night’s sleep and didn’t look as beaten up as some, and it was clear they’d looked after themselves and kept a pace they were comfortable with. They said before the race “out team spirit is to never give up and just go one step at a time”, and that’s what they did, showing an expedition race finish is achievable to new teams with the right preparation and attitude ... and maybe a spreadsheet or two!