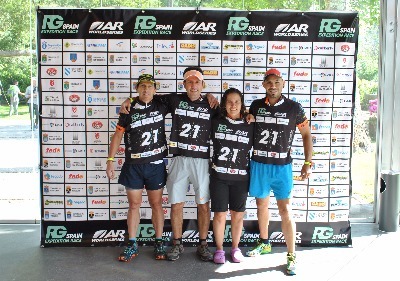 Trochando is one of the most legendary teams in the sport of adventure races in Colombia.

His first appearance was in 2002 and although many members have gone through, his philosophy has always remained. Train as friends, running as friends and achieve the finish line as friends.

For Trochando team is the first race abroad so they put much energy preparing to complete this challenge. Their goal is to complete a full course passing all timecuts.

Its members for this occasion is a mixture of old friends and lots of desires of adventure.

Lina Vargas is the team captain. She has been at three AR World Championship (Brazil, France and Ecuador), and his experience will be key to taking the team to the finish line.

Gustavo Arango is high performance athlete. He was skating selection of Colombia and is a veteran of adventure racer in Colombia. Gustavo is an example that sport has no limits. Two years ago participated in the AR World Championship in France.

Lucas Moreno is the youngest of the team. Rescuer and outdoor lover. It is one of the original members of the team and returns to meet friends after a long time living in Switzerland.

Rodrigo Bolívar is the team founder. Although this is his first international experience, he has taken part in major adventure races in Colombia and hopes keep on playing the game. Navigation tasks are under his responsibility, as is one of his main passions.