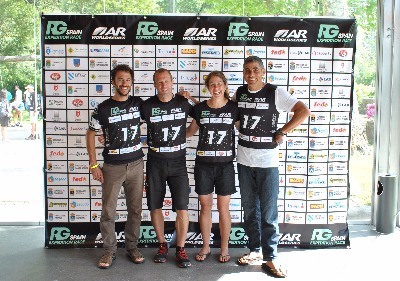 It's time to introduce the obvious favorite team to reach the Plaza de Obradoiro finish line in first position.

This is the Seagate, who proclaimed world champions in the last ARWC (http://live.huairasinchi.com/static/news/8991.htm), and who have also achieved the first position in the first race of the ARWS in 2015, the Godzone (http://godzoneadventure.com/world-champion-adventure-racers-seagate-win-godzone-2015/)

The four members of this formation have been world champions anytime, three of them repeatedly, and their faces are the most repeated between the champions of the last editions: http://www.arworldseries.com/arworldchamps.htm

In Raid Gallaecia Expedition Race, the team will be formed by Nathan Fa'Avae, Stu Lynch and Sophie Hart, and with the joining of the catalan Albert Roca, world champion in 2014 with Thule team. Both Stuart and Albert have participated in other editions of the Raid Gallaecia, so the Galician geography is not an unknown for them. Meanwhile, captain Nathan Fa'Avae and Sophie Hart (doctor of profession and one of the women with higher performance in these races) are looking forward to land on our land and discover all we have prepared.

We expect to see a great show with this participation, and luckily, their rivals put them difficult to maintain the favorites tag untill the end!