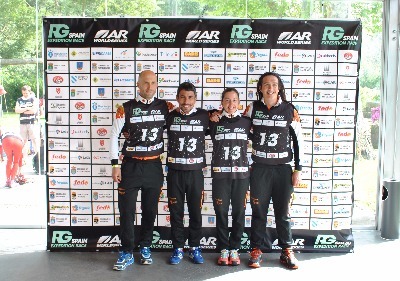 A new team playing at home, the Marqués de Vizhoja-Cornelio, integrated by: Diego, Candido, Isaac, Isa and Riveiro (this one as a substitute).

This team was born of the common illusion to achieve the challenge of completing the Raid Gallaecia Expedition Race, an unforgettable experience living together as a team and as friends, in the beautiful setting of the Galician land.

After the announcement that the Club Gallaecia would organize an evento of the ARWS in Galicia, the Club Cornelios was activated to ensure that at least one club team had the opportunity to participate in this event. It was a unique occasion (or as always said Diego "a candy in the mouth") could not be let go without at least having done everything that was in their hands for it.

After a lot of time and effort, they got the official sponsor, Marqués de Vizhoja, and several collaborators, without them they could not be here. And 5 were the valiant athletes on this great adventure (being Francisco Javier Riveiro a substitute).

The team will be captained by Diego, president of the club. The navigation decissions will be on his compass and maps, competitive and demanding spirit and great mental strength will be the main driver of the team. When someone comes down the prevailing voice of Diego is the first thing they will hear and then continue with the same strengh.
His sporting history goes back years in other sports like football. He started with the orientation about 3 years ago, in the galician adventure races league, and creating the Cornelios Raiders Club.

Isaac, like many others from Moaña, started as a rowing athlete in bateles and the was ascending to trawlers in the 91. He got great results as the Spain Championship of 96 and 97 and several Galician championships with SD Tiran. He left the trawlers with the Vila de Cangas in 2004, and currently he practices BTT, duathlon and orieentering. His beginings in the world of raids is very recent, but has already achieved good results in the Spanish League and the 2014 Iberian Championship.
It is the veteran of the team and he could calm down the team in moments of greatest tension and making important decisions. His knowledge of the sea and rowing technique will be a big factor in favor.

Candido began his racing career in motorsport in 2001 as co-pilot of rallies.
He is currently the official team pilot of Racing Team Peugeot Spain, participating in the French Championship and the Championship of Spain of asphalt and gravel. In his resume a the junior world champion in 2012 and third in 2013 are the highlighted.
It is a big fan of climbing and triathlon. Her positive spirit will encourage them in times of downturn and will see less hard horizon.

And finally the girl of the team, Isa. His great passion is orieentering, both on foot and by bike, although its inception in orientation was in the adventure races. It takes several years competing in the Spanish and Galician adventure races league and in the Galician League of foot and bike orieentering.